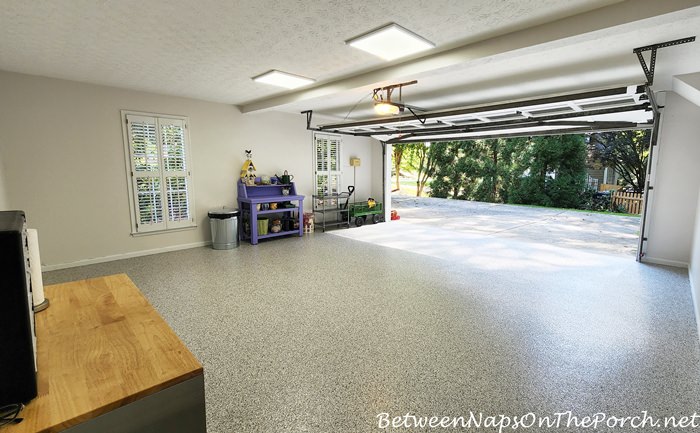 Well, it looks like this again. Arggh! 🙁 I’ll explain more on Monday but basically, the original painter the company sent out did a terrible job of fixing a couple of places on the ceiling where the sheetrock tape that was used 40 years ago was starting to loosen in places. He really botched it. So the painting company has sent out a much more experienced painter who is fixing what the original painter did on the ceiling, in addition to some other areas he missed. The new painter has covered all the newly-painted walls and the cabinets I’d brought back out with plastic to protect them. He’s coming back again today, but it looks like he won’t finish until sometime next week. I know this had to be done, but I am reeeaaaallly ready for the garage (and life) to get back to normal. 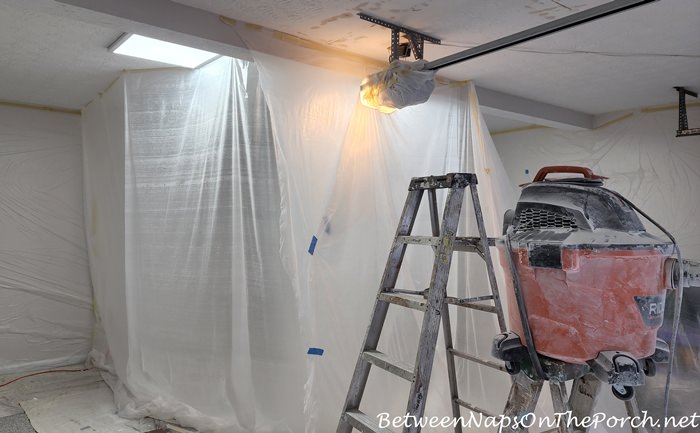 In the meantime, I thought I’d share a little hack I thought of in case it would come in helpful for a similar situation in your life. See those two cans I have on either side of the potting bench in the photo below? The one on the left is a large metal trash can and the little one on the right is a can I purchased from my local Wild Birds Unlimited 20+ years ago. Currently, the small one is filled with trash bags in varying sizes. Over the years it’s held birding supplies, potting soil, and all number of things. 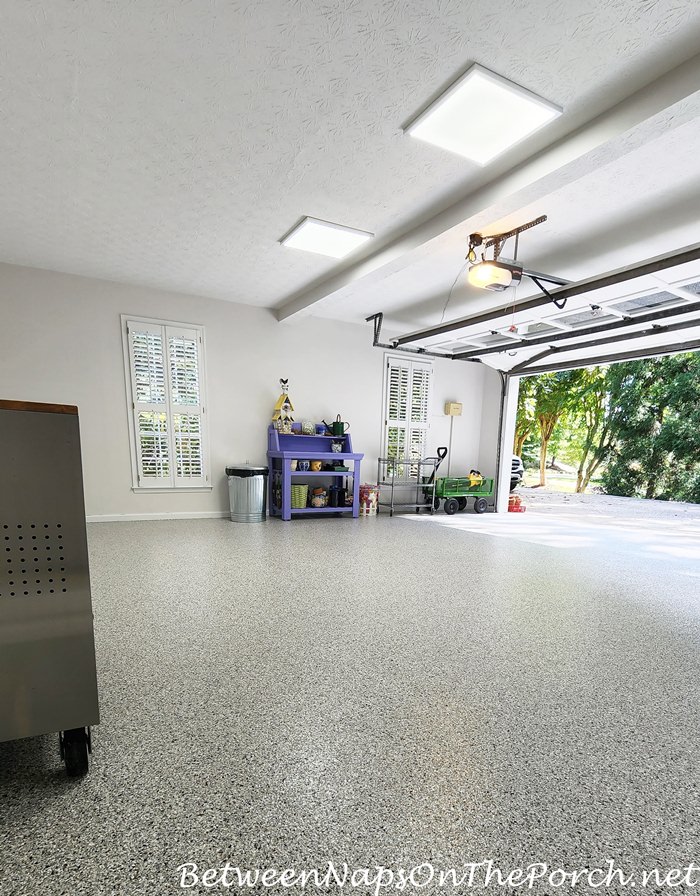 After having the new floor installed here in the garage, I’ve been a bit worried about those two cans–worried they would scrape the floor if they were dragged around on it at some point, or maybe leave rust marks on the floor if the bottoms began to rust a bit. I’ve been told this floor is super hardy and can hold up to almost anything, but I’d still rather not take any chances. So, I got an idea.

I have a second small can in the laundry room that’s just like the one on the right side of the potting table, only this one has an image of birds on the outside. It was also purchased from Wild Birds Unlimited 20+ years ago. I actually purchased them both on the same day after falling in love with the beautiful images. This one in the laundry room is filled with bird seed for my outdoor feeders that get filled every other day. 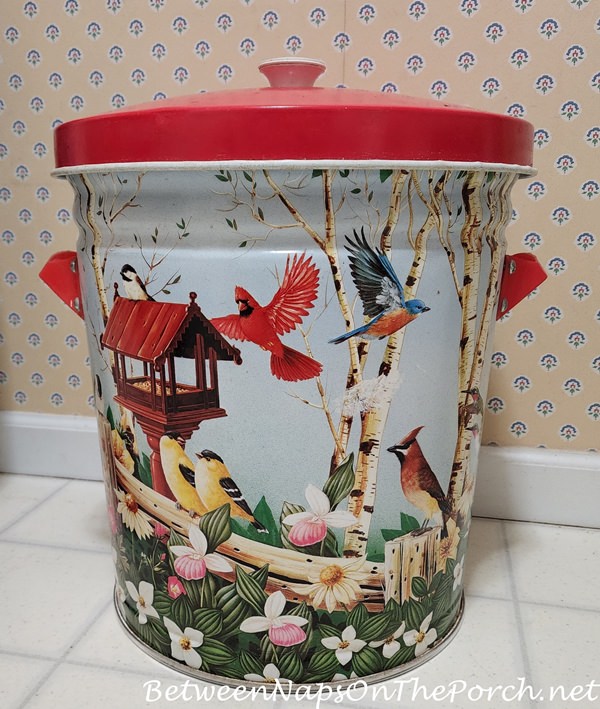 Over the years the bottom edge/rim of the can has started to show a bit of rust, occasionally leaving a light rust-colored ring on the laundry room floor. If you look closely, you can see the ring before I removed it with the super cleaner I’m always raving about. (Cleaner is available here although it appears they only have it right now in the large refill size: Super Cleaner.) 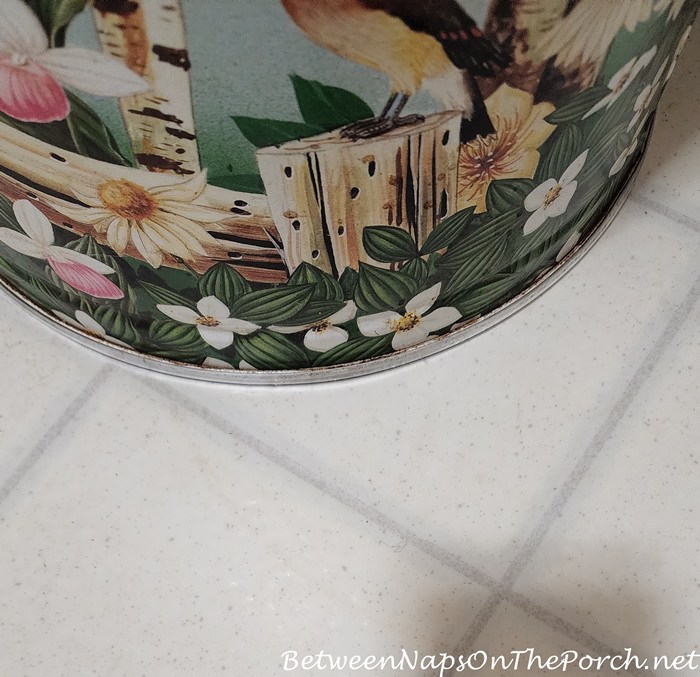 I was able to remove the ring with the super cleaner, but I wanted a way to protect the laundry room and the garage floor from any possible damage/rust stains from these smaller cans. When I flipped the can over, this is how it looked on the bottom. 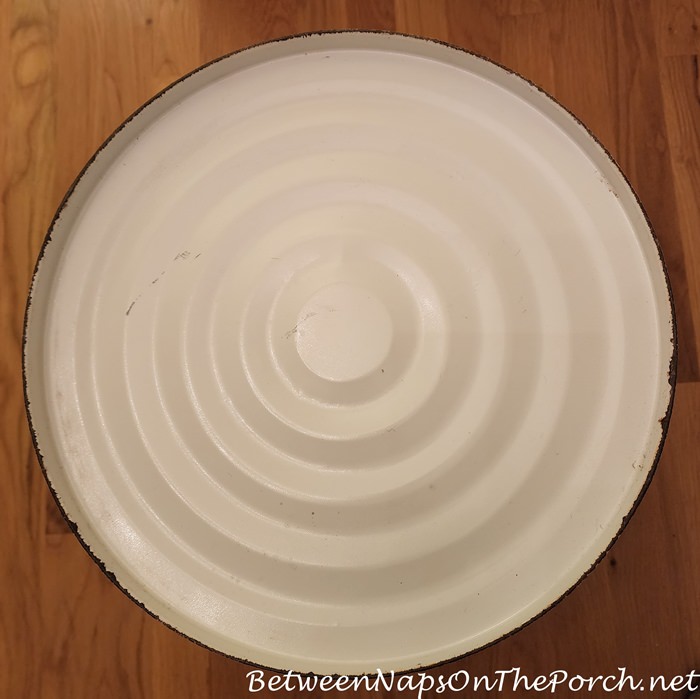 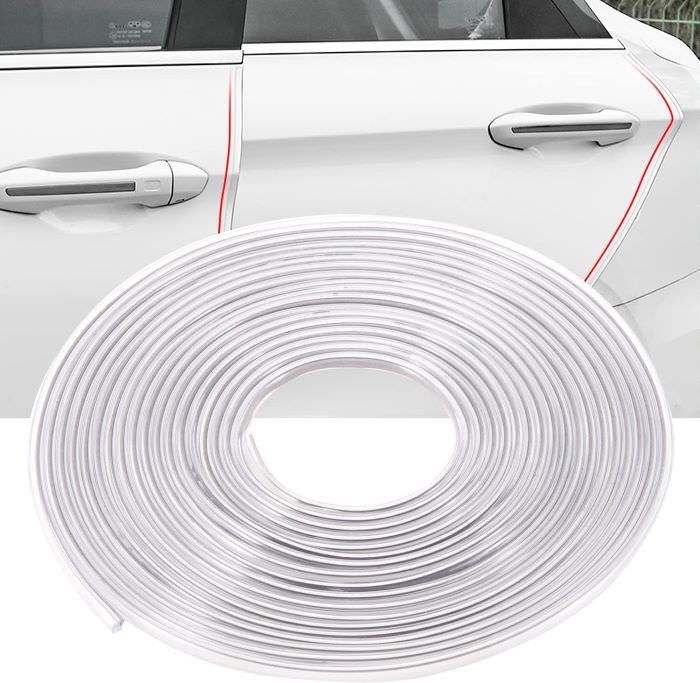 Here’s how the edge protector looks on the small decorative can that’s normally in the garage but is back inside right now while the painting is being done. You can’t really see it since it’s clear. I like that! Now I never have to worry about that can leaving any rust marks on the new garage floor. 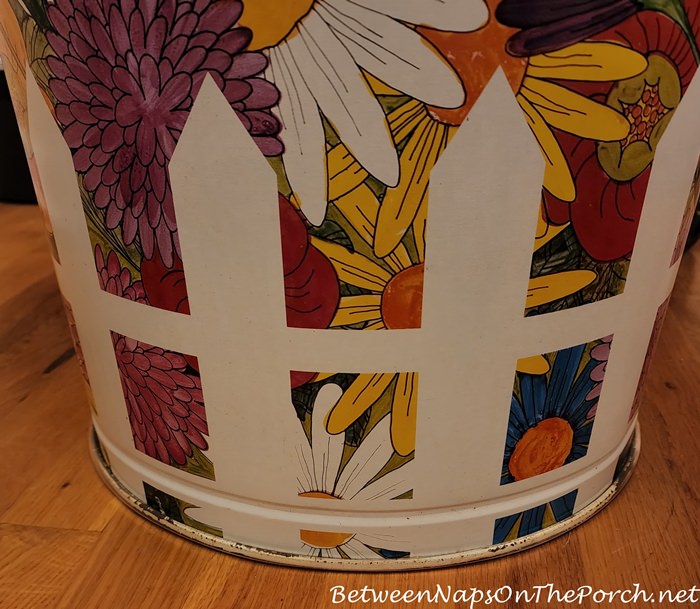 I took a few photos when I was applying it to the large trash can that’s normally in the garage. This can is made of galvanized steel, which may not ever rust, but I still like having the protective edge strip in place so I can shift or move the can around without worrying about scratching up the floor. To apply the clear edge strip, I just pulled out the inner red tape which exposed the adhesive side inside the clear strip. Then I pressed the protective strip over the edge of the can. That’s how easy it is to apply! As I worked my way around the can, I kept pulling out the red inner strip so the adhesive inside would bond with the edge of the can. 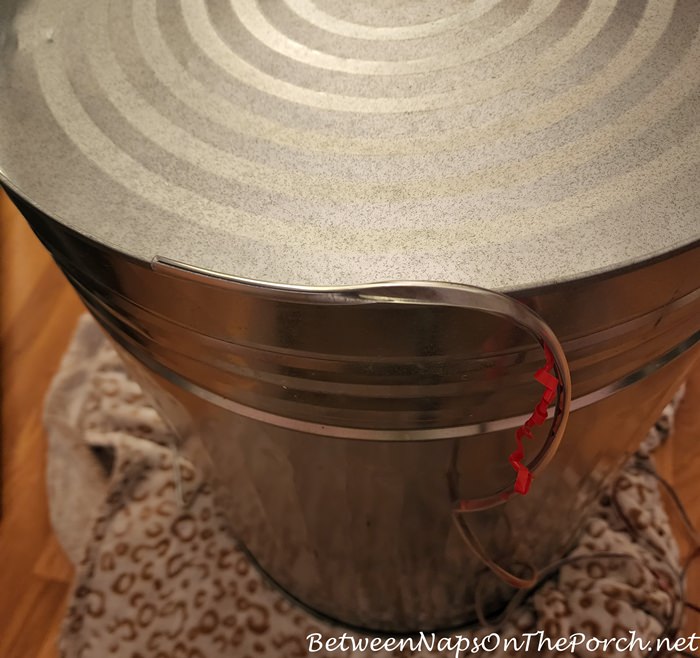 Here’s where the two ends met once I had covered the edge around the entire can. 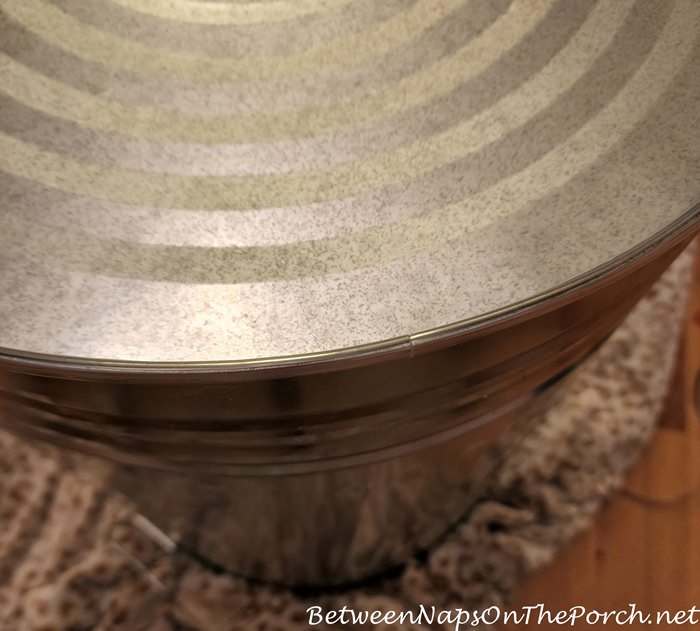 Hard to see it but here’s how the can looks now with the clear protective strip in place.

This clear protective edge strip is available here: Clear Edge Protection. I purchased the 16 ft length/size and had enough to do the large trash can and both small cans with around 3 feet left over. Just wanted to share this little hack in case you have a floor that you want to protect from a heavy can or have any cans that could possibly rust at some point.

The painter has arrived, I hear him working downstairs in the garage, so I guess I’d better run down to see if he needs anything. Hopefully, he’ll be able to make a lot of great progress today.